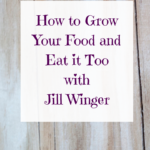 Jill is a blogger at prairiehomestead.com and homesteader in Southeast Wyoming. She has a cookbook that is going to be coming out and it has lots and lots of old fashioned inspired recipes that I knew you all would love and appreciate. Jill strives to help people be inspired to grow their own food and learn old fashioned skills. There is a course that follows the cookbook that will help you learn those skills. Today Jill and I talk homeschooling, raising strong-willed country kids, and how rural life teaches resilience and problem solving, as well as different strategies and tricks that Jill uses to create her fulfilled rural life. Plus you’ll hear:

Jill lives on the prairies of Wyoming with her husband, Christian, and three kids ranging from eight to three. Jill and Christian were both raised in town but felt the pull to live rurally. Christian was involved in FFA showing pigs, and they both were involved with horses. When they got together they knew that they wanted some land for the horses they had but they didn’t see a vision for anything bigger than that.

As they were walking the property that they found she realized that she wanted the property to be used to its full potential. Starting off small with composting their horse manure ten years later they have a full-blown homesteading operation and business.

When they first got started Jill started a blog. It was more of a journal of what was happening on their farm but as she got more serious about it and it is now their family’s full-time income. She has multiple streams of income with the blog but their biggest income stream are the DoTerra Essential Oils she started blogging about and using two years ago. Her DoTerra team spans across the US and Canada and they have the opportunity to travel and coach them, which she really enjoys. In addition she does banner ads on her blog, has a few Ebooks, participates in affiliate launches, and now she has her cookbook and cooking course.

All About the Cookbook and Course

Jill has focused on recipes that use whole and real foods. She isn’t jumping on the latest dieting trend, her recipes are for anyone’s kitchen without all the processed stuff. She calls it “Heritage Cooking for Any Kitchen.” You don’t have to have a garden or live in the country to appreciate or cook the recipes and they taste good!

How did she come up with the recipes?

The recipes have been a good mix of what has been popular on her blog and what are family recipes that they eat on a weekly basis. However, she made sure there are recipes included that her audience hasn’t seen yet.

She knows there are times like winter, where life is a bit more balanced and not so busy all the time. Whereas the spring and summer are much busier times in the lives of everyone in their family unit. So during those seasons they are very selective about what they say yes to. She is intentional with their time being sure to guard family time as fiercely as she guards times of rest.

She works hard to strike a balance not only for herself but for her kids. She wants to them to be involved in activities but makes sure they have plenty of “just be kids” outside, barefoot, in the summer sun fun too. Jill homeschools her son and, although a little extra chaotic some days, she loves that him and her youngest are home and a part of their lifestyle. She tried to homeschool her daughter but they butt heads too much and so they made the decision to enroll her in a private school which she is excelling at.

Her #1 rule for homeschooling her kids is to remain consistent and in some cases that means simply outlasting their protests for school that day. Eventually they’re going to realize that you’re more determined than them and whether it takes one hour or three it’s going to happen. She’s also the first to admit that there are good and bad days.

The goal of the course is to give people the basic nitty gritty skills I need to do things like sourdough, or sauerkraut or curing a ham, making bread, etc. All of the cooking you might associate with your grandmother’s kitchen. The course is primarily video. They hired a professional film crew that came to their home and had three days of shooting. Jill said “it was the most exhausting experience of my life. It was a blast but I was comatose by the end.” However the videos turned out amazing. The course is with her step by step in the kitchen hanging out plus there are a lot of print materials and bonuses, even free stuff and discount codes.

Some of the bonuses in the program include a free sourdough starter kit once you pay shipping, there are also free Ebooks and extra videos from other homesteader friends and influencers. Jill’s goal is to really set you up for success.

Weather in Wyoming has always been a struggle for Jill when it comes to homesteading. Each year is a crap shoot to see what vegetables grow, and survive, until harvest. Getting out of her comfort zones and unpacking her fears over everything has been a challenge as well but has also been very rewarding for her and Christian.

When you have something pulling at you, be it homesteading, starting a business, whatever it is, get the information then go do it. Don’t get stuck in the paralysis and the wondering or even the research. Don’t let fear hold you back. Jill’s mantra?

Action cures fear.Just start, you’re going to fail no matter what it is. You’re probably going to to be pretty horrible in the beginning but keep at it and you’ll improve.

What Jill is Excited About

The cookbook release is first and foremost but they are also taking the next step in their homesteading journey and starting their own beef herd. They’ve had cattle over the years and a Brown Swiss cow for milking but they’re expanding their herd and getting into Herefords.

What is One Tool or Resource that Helps You Find Fulfillment

As the excitement, traveling, and connections have picked up over the last couple of years the one thing she always comes back to is staying close to nature. When she’s out in the garden, doing chicken chores, and has dirt underneath her nails is how she stays grounded.

Her Advice for Aspiring Homesteaders

First and foremost there is a place in homesteading for everyone but she always recommends starting in the kitchen. Whether you’re growing the food, getting it from the farmer’s market, or a local farm you’re going to be learning new skills in the kitchen.

The Most Valuable Skill She’s Learned

Resilience. Homesteading is all about resilience and problem solving. Things are going to go wrong, whether it’s a cow that doesn’t breed back, a garden that has been hailed out and needs salvaging, whatever it is it has taught her how important it is to never give up.

Insta: http://instagram.com/theprairiehomestead (this is where she likes to hang out most 😉

Is Your Canning Space Overwhelming?

Get My Canning Inventory Check-List and stay in Control! It will be delivered directly to your inbox as soon as you plug in your email right here.

Previous
How to Grow Great Radishes In Your Home Garden

Next
10 Free Easter Coloring Printables Just For You
Comments are closed.