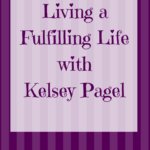 Kelsey grew up on a family farm where they had cow-calf operations as well as row crops. Both of her parents worked on the farm and built it from the ground up. When the time came she received her degree in Agribusiness from Kansas State and married her husband, Matt, five months later. They moved into farming and ranching with his family doing similar work to what she grew up doing with her family. Now she helps manage the farming operation and is gearing up to launch a blog and podcast where the focus will be marriage and farming, living a fulfilling life, and other topics she is passionate about.

Now she helps run a farm where they raise their calves from start to finish, row crops of corn and soybeans, and mix in cover crops to help the soil and raise their chickens. Her and Matt work alongside his family which can be challenging finding time for one another, themselves, and not be overwhelmed by the year long to-do lists.

Farming Life and Being a Wife

A priority of hers is that her and Matt have a weekly date night and once a month that date night is getting out. They enjoy a date night in grilling steaks and hanging out at home but are sure to get out of the house for a date at least once a month.

She also recognizes how important attitude is when you’re working hand in hand day after day. It’s important to not let the little things get you down or even when you do get upset to just let it go and move on, which can be difficult. Being strong willed this has been a challenge but she’s gotten better at it. It helps that her husband and father-in-law allow her the autonomy to do “her” tasks the way she wants to do them. A rule she tries to live by is if it won’t matter in five minutes, five months, or five years then to let it go. However she’s also diligent in communicating with Matt if something is really bothering her.

Since she came into an already existing family farm she has had to adjust working how they’ve done things for years where she would rather try new things to meet goals. This has been a challenge but her husband has slowly become more open to trying new things. Her father in law retired from farming but his very knowledgeable with the equipment and comes down often to do mechanic type work.

How She Handles Conflict in Her Marriage

Everyone who has cattle knows how heated things can get when working cattle and one thing she has learned is to try and not get mad and yell back in challenging situations. She has to take a step back and understand that he’s upset with the cow calf that isn’t going where they’re supposed to go. They’ve also worked hard to improve their facilities to minimize those type of scenarios but also going into it knowing something isn’t going to go exactly right and to let it go.

She decided to take a temporary job at the county office mostly to have boundaries in order to work on her blog and grow that business, however with the government shut down she wasn’t sure if she was going to go back. Her and Matt are preparing for calving season, they’ve moved the herd closer and closer to home over the last few months to prepare, and they work outside whenever it’s nice enough to make improvements as well.

When she’s working on filling her own cup Kelsey enjoys a lot of podcasts and books to fulfill her learning something new and hearing other people’s perspectives. She also wants to try new, more active things with her husband to get them out and having new experiences. Matt snow skied in college so they went to the lodge he used to work at and she loved getting to see him in his element but she thinks that she may sit out next time they go. She was sore for a week after trying her hand at it.

When they’re on the farm and working lunch is often spent at her in-laws where her mother-in-law is great about keeping a full fridge and inviting them over to lunch. Kelsey raved about how well her mother-in-law takes care of her and her husband. When they’re not over there they have a full freezer of beef and meatballs are a favorite. Neither her or her husband are great about cooking so grilling steaks is always a favorite go-to as well.

What Kelsey is Excited About

The blog is going to be focused on marriage in farming. Kelsey is very passionate about marriage and being intentional in your marriage, especially when you’re working together. Her biggest tip in maintaining a healthy marriage is being intentional so you don’t end up with a roommate. You need to figure out what it is that you need in yout life. You have to remember that your husband cannot read your mind and vice versa. One of the things Kelsey has done is write down what she needed from Matt daily, weekly, and monthly.

She is a strong believer that you need to believe that your spouse is a good willed person. She has a higher chance of being loved and feeling connected by him having that piece of paper to reference. She says “you need to put your needs out there.” She wrote down everything from put your dishes in the dishwasher, put your socks in the laundry basket, and how often she needs intimacy.

She listens to a podcast called “One Extraordinary Marriage” and they talk about both partners initiating intimate time. Her and her husband have split the week up where there’s certain days he’s supposed to initiate and there’s certain days she’s supposed to initiate. So we know a couple times a week we’re going to be connected, it’s also really hard to be intimate with your spouse if you’re holding onto resentment from the yelling that ensued when you were working cattle. So it also challenges you to process your emotions in real time so it doesn’t build up. She encourages married couples to not only be intentional about your marriage but also with the people who you surround your marriage with. You need to be sure that those people are in line with the values you want for your marriage and life. Matt is super supportive of her starting the blog and, eventually, a podcast.

The Best Advice Kelsey Has Received

Where You Can Find Her