Raising kids is never dull! Goat kids, that is. This year, we had two adorable bottle baby goat kids on the farm.

Sampson was born December 1st and after his mother passed away from milk fever, we started him on the bottle. His mom was able to provide colostrum for an entire day before she passed away, so he received her antibodies to boost his immune system. 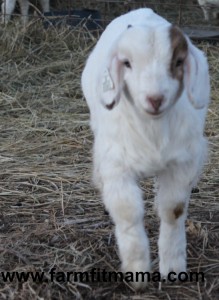 Mr. T was born one month later on December 31 and he was a twin. He and his sister were so cold the day they were born, we had to take them inside to warm them up. After they were warm, his sister got to stay with mom, but Mr. T got the better end of the deal in my opinion…because he got to be Farm Fit Girl’s pet.

For any baby mammal’s first few hours of life, colostrum is needed. Colostrum is the “first milk” the kid must consume to receive nutrients, calories, and antibodies in order for it to thrive. Sampson was able to receive his mom’s colostrum before she passed away, but Mr. T was too weak to nurse his mom. So, we did the next best thing.

We keep the Manna Pro Goat Kid Colostrum on hand for times like these during kidding season. The colostrum has dried whey for protein, calories, and nutrients to give the baby energy for a healthy start. We fed him four ounces of the warm colostrum every four hours.

Sampson is eating once a day now and Mr. T is getting his bottle twice a day. We use 20 ounce pop bottles with Pritchard Nipples. As you can see, both bottle babies are bright eyed and healthy.

They are Farm Fit Girl’s best friends and they are teaching her so much.

Disclosure: This article contains affiliate links to products I have used and will use again.

I loved how creative this post was and of course who doesn't love photos of cute kids! I chose your post as one of my February Favorites for the Country Fair Blog Party. I hope you share again in March. The Blog Party goes live on my blog tomorrow morning at 6am and will be open all month.

Thank you so much! I will definitely be posting again!