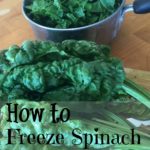 Did you know you can freeze spinach for later use to avoid wasting it?

Freeze spinach for yummy recipes later into the year. Farm fresh recipes don’t have to be in-season only. Preserve the taste and nutritional value by putting it up in a safe and secure manner.

There are a few safe ways to preserve fresh spinach. You could dehydrate it, can it, blanch and bake it or blanch and freeze it.

Fresh spinach can be bought at a store or farmers market. Or, you can grow it yourself.

I find spinach easy to grow in a good fertilized spot on the South side of my house. In the morning, the spot is shaded but then full sun in the afternoon. It is the perfect spot to grow big delicious spinach leaves to eat.

You don’t need a lot of space to grow spinach. You could even grow it into containers!

It all starts with the perfect spot and planting the seeds. Spinach seeds are teeny tiny, so I prefer to plant the seed tape. The seed is already evenly spaced into a toilet paper thin fabric that I simply plant shallowly into the ground.

After the seeds are planted, they require water. There must be moisture for the seeds to germinate and take off. Most years, we received steady rainfall. But sometimes we don’t receive that rainfall. So, we have to water it. Weed control is also an issue that must be tackled for proper spinach growth.

Weeds and grass are competition for young growing spinach. Those darn weeds can take over so easily. I like to hoe in between as close as possible. Then, I pull the weeds by hand within the plants.

Caring for spinach can be a tedious task but the rewards are worth it when it comes time for harvest.

Spinach is ready to eat based on your taste buds. You can pick and enjoy it at any stage from baby to mature.

The best thing about spinach is the regrowth you can get from the plants if harvested correctly. You can enjoy the spinach longer. The regrown leaves are just as delicious and nutritious as the first cutting.

I like to use scissors. You could also use a knife, but I like to make a simple clean cut for regrowth. Proper cutting can lead to more regrowth for a longer fresh growing season.

Spinach has long stems. Cutting the stem at about half the length of the stem will generate proper regrowth. Again, regrowth is a great way to enjoy your spinach longer.

The end of the life of spinach is when it begins to make a seed head in the center. The leaves may also begin to taste a bit on the bitter side. Waste no more time and no more spinach.

One option is to cut and freeze spinach for later use. This option is very universal and doesn’t require a lot of extra tools to get the job done.

Spinach must be washed before anything else. I like to use a strainer. I scrub the leaves to make sure all the dirt and insects are washed away.

After the spinach is clean, start a pot of water to boil. While you’re waiting for the water to boil, chop the spinach into smaller pieces using a cutting board and chopping knife. I also like to remove the stems. My family just prefers not to eat them. I don’t waste them. They go out to the chickens and pigs.

Once the water is boiling, it’s time to add your chunks of spinach. This is the blanching process, which is basically cooking the spinach. The spinach leaves need to stay in until the water starts a rolling boil again. Then, move the spinach to the sink of cold water. Remove from the pot with a straining spoon into the cold water to cool.

When the spinach is cool, it’s time to take it out, let it dry for a bit and bag it up to freeze spinach.

Once the spinach is cool, it’s time to freezer bag that freshly blanched spinach. But wait.  Let’s label that bag first.

Write on the bag with permanent marker or pen. Write what is in the bag (Spinach) and the date (2016).

Now, you can add the spinach.

Once it is in the bag, press the air out and seal it up tight. Pop in into the freezer. Done!

There are numerous ways to use thawed frozen spinach. I plan to use it to make a spinach artichoke dip and a yummy lasagna.

Another way would be to puree it and mix it in with ground beef for hamburgers. Your family will never know you’ve enhanced it with nutritious green spinach.

Aside from enjoying it fresh, spinach can also be frozen to be enjoyed later. This process to freeze spinach is a great way to decrease produce waste and increase the nutritional value of recipes later in the year.

Is Your Canning Space Overwhelming?

Get My Canning Inventory Check-List and stay in Control! It will be delivered directly to your inbox as soon as you plug in your email right here.