The month of June flew by so fast that I nearly blinked and missed it. June was filled to the brim with camps, weddings, planting, kidding, birthdays, and lots of rain. 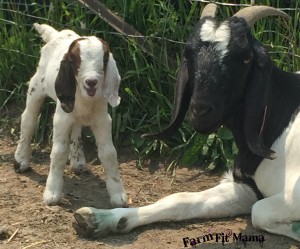 Nevertheless, the month of June gave me a few life lessons I wasn’t really looking for. It’s funny how that happens.

How about you? Have you ever found life lessons in a given situation.

I wouldn’t say many of our situations were great, but I tend to try to find the good in everything. This characteristic drives my husband nuts-o!

I will share with you the main happenings of my month embedded into the five major lessons I learned in June. Enjoy.

Smell the roses. It had been a stressful morning beginning at 3:45 am. I ran to the gym to teach my BODYPUMP class at 5 a.m., rushed home to pack up my daughter and take her to daycare, then a breakfast meeting at 7:30 (which had amazingly fresh homemade doughnuts!).

I left my breakfast meeting early to drive 15 minutes to the neighboring town to pick up supplies for an entomology camp I was helping with that day. Before I left town, I stopped to get gas.

From the gas station, I drove to the camp venue and was almost there. I saw the car coming from the side so I slowed way down. I had no stop sign, but she didn’t have a stop sign either. Therefore, she failed to stop. It was the first collision I had ever been in.

Luckily, neither of us were going very fast. My elderly 2002 Dodge Intrepid came out of it with only a scratch and she claimed her vehicle was fine. So, let it go and went on her way.

About an hour later, I was registering participants for our entomology camp when I saw her pull in. She came over and said that there was more damage to the vehicle. I went ahead and gave her my insurance information just to be on the safe side. This all would not have happened if I would have just stopped.

I saw her coming. Why didn’t I stop? Because I had been trained to follow traffic laws, but I didn’t know who had right of way. I just knew I didn’t have a stop sign so I kept going.

With our busy lives, we could all keep going until we crash into something. We are trained to go go go. Sometimes, you just need to stop.

Another reason to slow down or stop is so you don’t miss those golden opportunities.

2. Opportunities can be missed over and over again.

It’s really true. They can be under leaves and you don’t see them the first three times they are there. 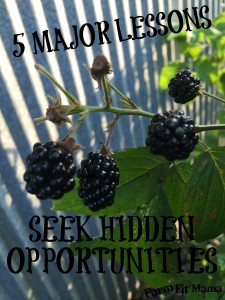 Or worst…you KNOW they are there but you do nothing to obtain them.

The blackberries are ripe now and last night, I was picking some. Of course, I was hurrying just a little bit and I was just walking by looking for black ones. I wasn’t finding many at all.

I had walked down the rows three times. Honestly. I almost missed the three most beautiful black berries on the planet.

They were hiding under their parent leaf and if I would have just pulled the branch up, I would have seen them.

Beautiful, ripe, delicious blackberries – free for the taking. They were mine and I would have missed them had I not looked thoroughly through the thick branches. That situation made me think deeply about our daily lives and opportunities that we miss because we aren’t looking hard enough.

As an introvert, it really takes me a long time to get to know a person. I’ve lived in my new community for six years now. I’m not really very good at getting out and meeting people. This is something I’m working on.

But, friends are something I’m ready to find and I even thought I’d like to find a best friend. I always thought that best friends were friends you could trust unconditionally. Maybe they were friends who would have your back always and be a shoulder to lean on in time of need.

This month, I decided after some posts on social media, that “true friends” are very hard and valuable to come by. I won’t go into detail on the situation at hand, but after reaching out to some ladies I thought I had things in common with and getting nothing in return, I’m just going to focus on my family, my platform, and my homestead.

I realized that you can’t go searching for friends. Friends are those around you who you see and who love you the way you are. I do have friends around me who are proud to have a conversation with me. I’m blessed for those friends who God placed into my life.

[Tweet “I will no longer be proactive to search for friends. Instead, I will use that energy to embrace the friends I already have in my life. “]

This will make me a better friend to those who actually care about me.

In the early part of the month, it seemed as though one of our cows was getting close to give birth to her calf. But her udder was HUGE. It was almost as if her udder was swollen. 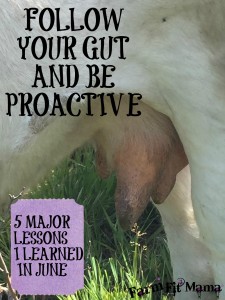 I, on the other hand, thought maybe she was having more than one calf. Twins are rare in cattle, but can happen all the same.

So, I was not proactive about getting her to the vet to have her udder looked at. I did think about it at first, but played it around in my head that she was fine. She wasn’t acting sick – she just acted normal.

Two weeks later, she had her calf. A beautiful big smoky gray bull calf. He was nursing on his own.

Her udder was still swollen, but he seemed to be getting enough milk. I told Matt about it and he would keep an eye on the pair as well.

Two days later, Matt called saying he thought the calf was weak, so he wanted to take a bottle the the pasture for him. We decided to take the truck and trailer to the pasture to bring the calf home.

To make a long story short, we got to the pasture, loaded the cow and checked her teats. Three of the four teats were hard as a rock meaning only one of the teats had milk in it! Ugh!

The poor calf wasn’t getting enough milk from mom to stay hydrated, which was why he was getting weak. As cattle producers, it is our responsibility to make sure our animals are taken care of and we had failed with this pair.

The calf nursed the bottle, but it wasn’t enough. He was just too weak and we ended up losing him. Plus, we will have to sell the cow because there is nothing the vet can do for her udder.

While we failed to provide for this pair, it’s imperative that a lesson be learned here. Be proactive and follow your gut feeling. Especially when there is a life involved. If I would have followed my gut two weeks before, the vet could have saved her udder. She would have properly working milking units and her calf would be healthy and running around the pasture.

This sad story is a lesson. Some of you may have opinions that we shouldn’t be raising cattle after this incident. But, it’s more important that we as young farmers learn from our mistake and become proactive producers. I will know what to look for next time.

5. Be open and accept people for who they are.

There was quite a bit of political and liberal happenings this month, such as school budget issues, the confederate flag debate and the gay marriage acceptance.

I have been keeping my opinions quiet on social media, however, this is my blog. I can say what I want, right? 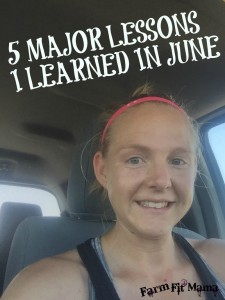 The best way to describe the weekend was this status from Facebook: “I opened up my news feed and all I can tell is the South rose again and attacked a Skittles factory”. Yep, I’d say that was about right.

The events in June will change history forever. I’m neutral to these issues or rulings, but what I am for is peoples’ acceptance. I’m all for accepting people for who they are and not judging them for their decisions and the way they are.

At our friend’s wedding this weekend, the preacher said something very appropriate for the weekend at hand. He said, “In mathematics, 1 + 1 = 2, but in a marriage, 1 + 1 = 1”. I say, “We are 1 world and lets act like it”. We don’t have to agree because we are all different, but let’s be civil and not judge one another.

We are one world no matter what. We all need to learn to accept people for who they are and live together as one, despite our differences.

The world would be a much happier place this way. I hope you all had a wonderful June. See you in July!

You CAN live and work the way you want to WITHOUT the worry, fear, and overwhelm. I help you to cultivate purpose and fulfillment in your Rural Life by sharing real highlights, struggles, tips and tricks to problems and solutions you might be facing that is keeping you from living your best life.

Here’s a few tidbits about Mindy:

I believe you CAN live and work the way you want to WITHOUT the worry, fear, and overwhelm.

My entire web site, business and life would not be what it is today without you. How I Plan to Connect More With You This Year. THANK YOU!!

Is debt threatening your way of life? Here’s 7 Proven Ways to Control Your Debt Before It Destroys You. You can start changing your life for the better!

Do the holidays having you feeling blue? Here’s 10 simple ways to manage a devastating holiday depression that you can implement today.