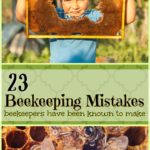 Have you been curious about certain beekeeping mistakes that have been made so you can learn and avoid those problems?

In the end, overcoming and avoiding beekeeping mistakes is all about knowledge gained and applying to do better. We can all learn from one another, especially through our mistakes. That’s why I compiled this list of common mistakes. And some that will make you go, “Hmmm?”

And hopefully, you’ll enjoy reading it but also learn what not to do instead. Let’s dive right in.

Most beekeeping mistakes involve timing errors. But a lot of mistakes beekeepers will testify to making comes from these beginnings:

All of these timing mistakes are so easy to overcome. Sometimes anxiety and fear is the biggest obstacle holding beekeepers back. And those fears keep beekeepers from actually doing what they want and becoming beekeepers.

But those are mainly just mindful mistakes. Here are some technical errors involving timing that many new beekeepers will make and own up to.

Many rookie mistakes involve space inside the hive. And that comes down to timing of when to add more space or take away space:

The other rookie mistakes are generally equipment, inspection and feeding related:

Not Proactive Enough to Fix KNOWN Mistakes in Time

Sometimes beekeepers made mistakes because they weren’t proactive. Here are some timely tasks that should have been done sooner to prevent more problems:

And problems can be fixed when you hop on them right away. Most beekeeping problems occur because the beekeeper didn’t act upon a problem. But maybe it’s more deeper than that.

Maybe it’s because the beekeeper didn’t have the knowledge needed to complete the task? Didn’t know who to ask? Or maybe they were just in the wrong place at the wrong time.

Staying on the subject of timing, it is quite possible to be in the wrong place at the wrong time. Bees can get pretty worked up over the little timing issues.

Bees like to get up early and go to bed early. They hate change and bad weather. And being moved.

Here are a few beekeeping mistakes that can happen when you’re simply in the wrong place at the wrong time:

The wrong place at the wrong time turns into just the wrong thing. If only you would have known better…This is why I’m sharing these with you. I want you to have the knowledge to avoid these mistakes.

And we all know there IS such a thing as the RIGHT knowledge versus the WRONG knowledge. Let’s talk about that now.

Lack of the RIGHT Knowledge

There’s so much out there. How to know which knowledge is legit?

I’m really striving to provide the best for you. What has worked for me and others according to my area. And “to my area” is the absolute most important three words you need to focus on.

Stay local to your area. You’ll learn about the right vegetation, environmental practices and timing methods if you just follow what other successful keepers in your area are doing.

But as we get started, there’s always a chance we’ll turn to the wrong person for help. Here are a few incidents you can avoid when looking for the right beekeeping knowledge.

Asking the Wrong People for Help

It’s so easy to want to find answers right away. But you really need to be super strategic in what resources you’re using. Join groups with people local to your area. That is the best advice I can share with you.

** How to Find a Mentor who will Actually Help You **

Involving Yourself with the Wrong People

You are the average of the 5 people you spend the most time with. Here are a few types of people you should not associate yourself with when it comes to keeping bees:

We can’t go through life and not learn through our own accidents. The following bullets are all real accidental mistakes beekeepers have confessed to making.

I share these so that you won’t feel alone or make these same mistakes.

“I Just Didn’t Know Any Better!”

Always always always cover up. I don’t care how “gentle” your bees are. You never know when they will be angry at you and come after you. It’s just best to be prepared.

Many errors are made when the equipment is used in the wrong way or is damaged or infested. Consult with your mentor for good quality places to purchase equipment and parts and how to use them properly. Here are some common equipment mistakes beekeepers confess to making.

Following a Fad Because it’s Cool

Please Use That Smoker!

** Get My Equipment List for Getting Started with Beekeeping **

Trying to Save Time & Money…But Investing in Problems

** Find out how to Requeen Queenless Honeybee Hives **

Not Placing Hives in the Right Places

Wasting too much money and then becoming frustrated is one of the main reasons beekeepers don’t stick it out. For many of those, beekeepers are doing it for the wrong reasons.

If you’re simply doing it for the money and not the love, it’s going to feel like a waste. Let’s look at some of the confessions of beekeepers who say that money was the hardest hit mistakes they faced.

Doing It for the Money

Trying to Save Money Buying the Wrong Thing

I’ve listed out these confessions of beekeepers in some of my favorite social media groups as well as a few of my own lessons learned. And I hope you’re not discouraged. I write this not to scare you away, but to encourage you to try.

Because the absolute worst action you could take from this is to decide you aren’t going to go through with your dream of keeping bees. If you’re afraid to fail.

Not Becoming a Beekeeper is the worst mistake you could make.

Many of these beekeepers stated they wished they would have started earlier. And all of these keepers who gave confessions in order to help you and me learned from their mistakes or else they wouldn’t still be keeping bees.

So, will you take action? Analyze this list and decide how they can help you to become a better beekeeper.

How can you let this list of beekeeping mistakes help you to succeed with your skill and learn rather than to run away?