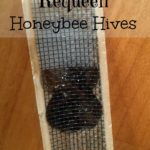 Did you know how easy it is to requeen queenless honeybee hives?

Requeen queenless honeybee hives to avoid losing a hive. Queens are an important asset to the fate of a honeybee hive.

Queens are the foundation of the future of their honeybee hives. They lay the fertilized brood eggs that hatch and repopulate the hive colony. Without a Queen, there is no chance of repopulating the colony with fresh new bees to work.

So, missing Queens can occur during the chaos of a swarm. Or when she gets too old to lay eggs, she will sometimes leave the hive behind.

Therefore, when there is no Queen, the hive will stay alive for a short while. But, eventually all the bees will die off or leave. The small population will result in a weak hive that will fail to fend off hungry honey stealing predators.

I caught a swarm on a cool May day. How exciting it is to have bees come into your yard! There’s no other option than to set up a hive for them.

I mean, they already found my place and seem to like it. Why not let them stay?

As I worked to catch them, I knew I had to get the queen to have any chance with this new hive. However, the swarm split into two swarms as I was getting more equipment set up. This made me unsure of which swarm the Queen was actually in.

One of the groups was still in the pin oak tree, while the other had split off into the back of one of our pick up trucks.

To catch the swarm in the pin oak tree, I set the box up right underneath with some sugar water. Then, I went over to the truck to gently gather up those bees by gloved hand. I looked for the Queen there but never spotted her.

I hoped the Queen was inside the new hive box with her bees. A few weeks later, I opened the hive box to check on things. But, alas, the bees were inside without her. The bees inside were actively making honeycomb but there was no brood eggs inside. This told me I failed to capture the queen.

So, I Called My Mentor for Answers

For years, I’ve relied on mentors to help me through problems I faced with my ventures. My mentors have been life changing in the way I manage my farmsteading ventures, raise my kids and live my life.

So, it was a no-brainer for me to have a mentor for beekeeping. My beekeeping mentor lives nearby and is always just a phone call away. He’s been a beekeeper for many many years and has gained expertise through these years.

When I called him to discuss the problem of the new weak hive, he told me I could purchase a new queen for the hive. He said it’s easy to requeen queenless honeybee hives. Since there were bees inside building comb, they might respond to a new Queen, which would save the hive in a timely manner.

Time was of the essence. My new Queen was ordered with a few others and arrived overnight through the mail from California to Kansas.

My plan was to introduce the new Queen into the hive using the slow release method. The cage contained a candy plug, so all I would have to do is pull the plug and install her cage into the hive where the bees were waiting.

For a successful slow release of the queen into the hive, you need a few simple things.

How to Requeen Queenless Honeybee Hives

Notice in the picture below how excited the bees are to see the Queen. They know their hive has a chance now that their new Queen has arrived.

So, in the next few days, the bees will become used to the Queen’s pheromones. They will hopefully chew through the candy plug to release her and her attendees. And then, she will begin to lay eggs for them.

Finally, I plan to keep feeding this hive with sugar water until it becomes stronger and able to make stores for itself.

Prevent Losing the Hive by Requeening It

Losing the Queen of a hive doesn’t necessarily mean the hive is a lost cause. You can requeen queenless honeybee hives with ease just by purchasing a new queen and installing her into the hive. But, you must make sure you catch it early.

Check for brood during regular hive inspections. That will tell you if the queen is there or not.

In addition, when you do this method of requeening queenless honeybee hives, one main release method is pertinent. It’s important to install the Queen using the slow release method. Let the bees get used to her pheromones and they can release her themselves.

Finally, recognizing the needs of a weak hive can make or break your success rate and help you meet beekeeping goals. Proactive management will overturn poor situations and increase hive growth and sustainability.

23 Beekeeping Mistakes Beekeepers Have Been Known to Make

How to Control Wax Moths in Beehives

[…] Then, Check out my post for how to requeen a Queenless honeybee hive.  […]