It’s story time, folks, and I’m going to share a sad story with you.

It’s sad, but it does have a happy ending. It has to do with saving innocent lives.

There has been a lot of talk about the use of antibiotics in meat animals, especially since Subway recently announced it would be conforming to the use of “antibiotic free” meat.

There’s no such thing as antibiotic free meat. It’s a marketing scheme and an untruthful one at that. You can read more on this topic by visiting my friends’ Ryan, Kelsey, and Lindsey’s blogs.

I believe there is a lot of uncertainty and fear about many tools livestock producers use to care for their animals and antibiotics is one of them. I want to share my story with you, if you will listen. 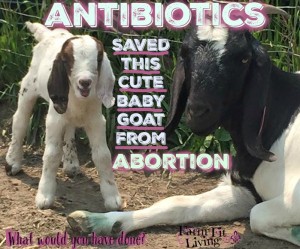 I want to share with you all how I use antibiotics in my meat goat operation to treat for a very intense and contagious bacterial infection, which causes abortion and premature births in baby goats.

First, let me give you a background of my meat goat operation.

I’ve been raising meat goats for six years and it was a definite learning curve from raising cattle. We decided to acquire goats in order to clean the brush around the new farm we had purchased, so from day one, they would be raised like goats should be raised. I’ve changed a lot of practices over time to get to the herd I have today.

I have a herd of some pretty amazing girls and guys whom I truly care about.

Here are some of the practices I currently use in my own operation:

Since that first kidding season, it has always seemed like we struggled with underdeveloped, preemie kids. I tried bringing in new genetics and even new breeds to improve kid vigor. Finally, last year, I decided to try something a little bit different not even knowing what the answer would reveal.

I decided to try synchronizing my herd and scheduling breedings so does would kid in the Fall to work with our schedules a little bit better. We would be around more to help kids up and get them going.

Here is a synopsis of my Fall 2014 kidding experience:

I bred the first group to kid the end of October. All of the does in that group kidded on time with live healthy kids, except for one older doe who kidded a dead kid still in the placenta sack. I thought it was just because she was older.

The next group was due to kid the end of November. But, about the middle of November, I walked out into the goat pasture and there were dead kids. The next day, another. Then, the next day, my favorite doe aborted a set of twins.

By the time the November group reached their due dates, eight does had aborted and four had given birth to kids whose lungs were underdeveloped. They were gasping for air and their moms did the best they could for them. I was able to save two kids out of that November group.

This was a sad time on our farm. I didn’t know what to do. I felt like a failure. I contemplated giving up and getting out of the goats. I thought I had tried everything I could.

This was a very low point in my life. With death all around me, I had to figure out my next step or else I was going to lose every single kid.

I developed a team of experts.

I talked to my vet, the vet at the University hospital, our state sheep and goat specialist, as well as read numerous article on abortions. I learned abortions in goats and in sheep had been a common problem for many years. I talked with other seasoned breeders and learned their protocols and treatments.

After researching and speaking with vets, we came up with a treatment protocol. In the mean time, two more of my does had aborted their kids. I didn’t have a minute more to spare.

I treated the entire herd (Does and Bucks) with 2 cc of LA200. I also started them on 4 mg of Aeromycin crumble sprinkled over top just a little bit of corn grain mix we have custom made.

After two weeks of treatment, the December group reached their due dates and started kidding. The first doe to kid had twins. One twin was very much alive. The other was dead and actually had it’s eyeballs eaten out of the sockets. It was quite a sight. Just an example of what the bacteria I was dealing with can do.

But, that dead kid was the last dead kid I have had since I began administering antibiotics prior to the does kidding. I kidded out 15 does in December and January – all alive and well. 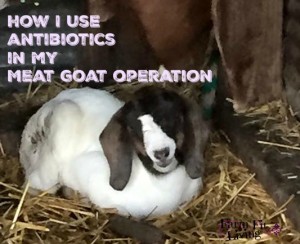 Five of my does who aborted bred back the end of January, so I actually had some does bred for June. I treated them as a precaution for the bacterial infection – 2cc of LA200 about 30 days before kidding plus a small amount of aeromycin crumble in a little bit of feed. These girls were on pasture and kidded on pasture, too.

They kidded seven perfectly healthy and vigorous kids who stayed on pasture with the moms until the beginning of September, when they were weaned.

My story has a happy ending. I have healthy baby goat kids just by being proactive and preventing the bacteria affecting the placentas in my pregnant does. Antibiotics helped me to prevent any more abortion and heartache. It allowed does who had aborted before to be mamas to healthy baby kids.

I tell my story as a way to highlight antibiotics as necessary tools when used properly and responsibly. I hope you can see why I will continue to use antibiotics in my pregnant does as a healthy pregnancy preventative.

“How do you feel about me using antibiotics to prevent abortions in my meat goat does?”

[…] and I’m for sustainable agriculture. I am also pro-technology, therefore pro-GMO. I’m pro antibiotics to prevent abortions in my meat goat herd. I am pro-science and research and I keep in close contact with my […]